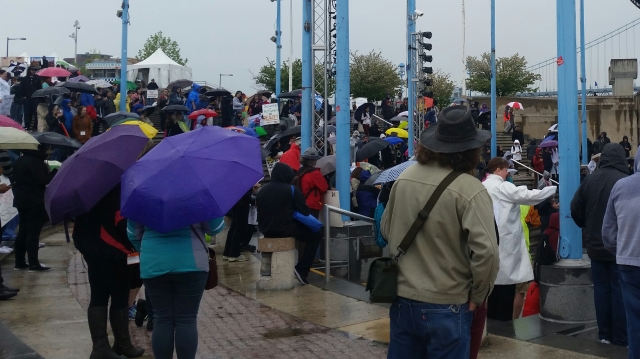 More umbrellas than signs by the end of the Philly Science March. Impressive how many people stuck around despite the bad weather!

Many of us here at Portrait of a Scientist marched in the March for Science this past weekend. Judging from the numbers across the country, many of you did too. Here are some of our thoughts.

I marched because I support science. Not just because that is what I do for a job, but because I know how important it is for the world and humanity. I believe that to be true for all of the scientists who march. You do not have to be a scientist to appreciate the power of science, but being up-close and personal with it does make that easier.

I spent some time  before and after the march tabling for my local women in science group. I was really impressed by the number of people who were excited to sign up to get the newsletter and to attend happy hours. I was also impressed by the number of parents and kids who came by interested in our outreach program. I’m so excited that our group can have an impact on the next generation, not just by making more scientists, but hopefully also making more people who are not scientists as their job, but who are science-literate and appreciate science.

I hope that the march opened some people’s eyes and piqued their interest. I hope that this is not an isolated event but the beginning of a movement, where scientists are more active outside of the lab, both in sharing their science and in getting involved in shaping the future of our country. My sign said: “Resist! Science is Power!”

I was so impressed with the way my local march organizers handled the organization and run of show. True, I couldn’t really hear the speakers. But that’s because I was running around with a couple of little kids looking at real brains and learning to titrate. I didn’t even get to march with my group (see previous sentence about little kids). Instead I ran into OHSU friends, Science Hack Day friends, OpenCon friends, and made new science friends. Oh, and I saw a lot of great signs!! Like this little guy, these badass witches, these very sick salmon, and – I didn’t catch her – but someone got a great shot an OHSU researcher who is really too busy for this.

While all this was going on, I was in touch with my fellow-fellow* Teon Brooks, who has been tirelessly dealing with organizational challenges and holding calls for 600+ people as the Co-Chair of Partnerships for the Science March DC. He hung with Bill Nye – think he had a pretty good time.

I had a great experience and feel invigorated to continue advocating for science and science education on the local and national level. I met fantastic people at local organizations that I’d like to partner with and had a great time!

*Call for Mozilla Science Fellowship applications is OPEN. Yes, they really reimbursed 6k worth of childcare expenses. It’s been a truly transformational professional experience, I blogged some advice, and I am happy to talk if you’re considering applying, @daniellecrobins.

I marched for science in my new city, Philadelphia (though I wish I could have marched with these guys!). Despite the heavy rain, a really diverse group turned out, many carrying signs, wearing lab coats, or dressed in costumes. A man dressed as Ben Franklin served as a reminder that scientific thinkers played a key role in the foundation of this city and country. Kids marched with their parents, and I had my baby in a stroller. 314 Action was represented, urging scientists to run for office, and letting us know about upcoming local political races. However, the overall tone of the march and speakers seemed more pep rally than political. There were even ‘science cheerleaders’, wearing tracksuits and waving pom-poms.

The most memorable moment of the day for me was when one of the speakers at the rally asked the crowd if all the scientists could raise their hands. I raised mine, and was surprised to see that only about 10% of the people there had their hands up. A young boy in front of me said in awe to his dad, “Look at ALL the scientists!” Meanwhile, I was thinking, “Look at ALL this support!”

Like a lot of scientists right now, I’m struggling to stay funded, to even maintain my job, stuck in a seemingly never-ending application process for a more permanent position. It’s hard not to get discouraged, and easy to think that what I do doesn’t matter to people– especially because of the current political sentiment in America and the blithe acceptance of ‘alternate facts’ by the governing administration and the public who elected them. But standing there, shivering in Saturday’s rain, were thousands of people who came out in support of what we do, who want to fund research, who believe that science can create a path to a better future, and who are willing to fight for it. It was incredibly affirming.

My own sign read, “Science doesn’t care if you believe. It just is.” I wanted to convey the message that there are objective truths that simply aren’t subject to negotiation. When the oceans rise because of global warming, are politicians going to stand in waders in the rising tide, legislating against it? Will they argue belief systems about evolution with antibiotic resistant microbes?

In Carl Sagan’s words, “For me, it is far better to grasp the Universe as it really is than to persist in delusion, however satisfying and reassuring.” On Saturday, it was wonderful to be surrounded by people who felt the same way.

Like Loading...
This entry was posted in March for Science, Resistance and tagged research. Bookmark the permalink.

1 Response to March for Science